Sample Chapter from ‘Hitting The Wall’

Key points from this chapter: 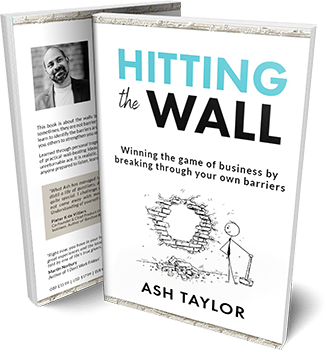 One, two, three, four, five, miss… another false start in a skinny, nervous, untalented, yet determined kid’s quest to master the magic twenty. As an eleven-year-old boy, I was frightened of everything and everyone. I was the smallest boy at school, and even most of the girls had more weight behind their shoves and punches than me. So, my early years at Holland Park School were spent running away from the first sight of trouble and the final bell of the day. When I got home, however, everything changed. I became Stefan Edberg beating Boris Becker at Wimbledon – in my imagination at least. 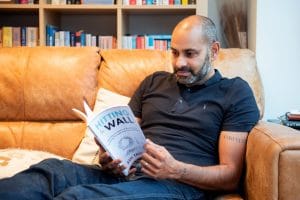 There was nothing about my frame to suggest I would be good at sports, especially such a physically demanding activity like tennis. And my track record at school confirmed the outward appearance. Like muscles, it seemed, natural talent had passed me by, and I excelled in nothing. But there was something about hitting that tatty old tennis ball against the office wall of the Campden Hill Lawn Tennis Club in Aubrey Walk that captured my attention. And before long it caught someone else’s attention too.

The tennis club was at number nine, and I lived with my parents and my younger sister, Seema, at number seven Aubrey Walk. Don’t think for a moment that because we lived next door to a tennis club, with a W8 postcode, it meant we could afford to join. If you know anything about London, at all, you’ll understand how space compels the rich and the poor to live as neighbours as they often share a pavement. But I could afford to hit a faded yellow tennis ball against an Edwardian wall with my heavy wooden racket whenever I escaped school and my chores.

So, there I was one day, striving to smash my rally record of seventeen when a tall man in a smart tracksuit stopped and asked my name. I’d seen him walking by many times before and entering the club so, in my mind, he wasn’t one of those strangers us kids were always being warned not to talk to. I told him it was Ash. He then introduced himself as Peter and said he worked at the club. The next day, just as I was about to serve out the final game in the Wimbledon semi-final, Peter stopped again and asked,

“How many do you think you can hit today, Ash?”

“Maybe forty or fifty?” I replied, nervous about looking like a complete no-hoper.

“How about aiming for twenty-five?”

Peter said with a smile before walking through the club doors to work with some of the brightest young talent London had to offer the world of racket sports. Peter Hennessey Smith was the Head Coach of Campden Hill Lawn Tennis Club, and, if the wall and everything that it came to stand for changed my life, Peter ensured it was a change for the better. You see, walls can stop you in your tracks or direct you towards a different horizon – which way you go often depends on whose voice you choose to listen to.

In the months and years that followed, helped by Peter’s challenges and occasional coaching, my rallies soured way beyond seventeen. At the point where most serves, except for the ones interrupted by passing cars, advanced to triple figures, the numbers became less relevant to me. The joy of returning the ball, time and time again, overtook the need for a number; and the practice, persistence and hard yards of striving for perfection became my new horizon. Along the way, my ‘off-court’ life changed for the better too.

I held my head higher at school; the bullying lessened and finally stopped, and I started earning money by grafting on local lawns, washing cars, emptying lofts and any other commercial venture I could find.

The wall I’d sometimes hated for sending me an extra-wide return had become a friend helping to explore and expand my limits. On my thirteenth birthday, there I was hitting my ball against the club office wall. Two hundred and twenty-one, two twenty-two, two twenty-three…

Get the complete book on Amazon, available in